I haven’t done a Top Ten list in quite some time. I thought today would be a great day for one.
10. Ran a 10mile race. Maybe you were looking since I told everyone about it, but some people were still surprised I actually ran a race and still lived to tell about it, so not everyone is as in the loop as you.

Me running, and not dying. Yet.
9. Snuck a garden gnome in my garden and he is still there! Now that you know, DON’T TOUCH HIM. HE STAYS.

8. Texted my friend and gave her shit for missing my birthday but discovered she did leave a message that FB deleted so really, I looked like an asshole for being an asshole. 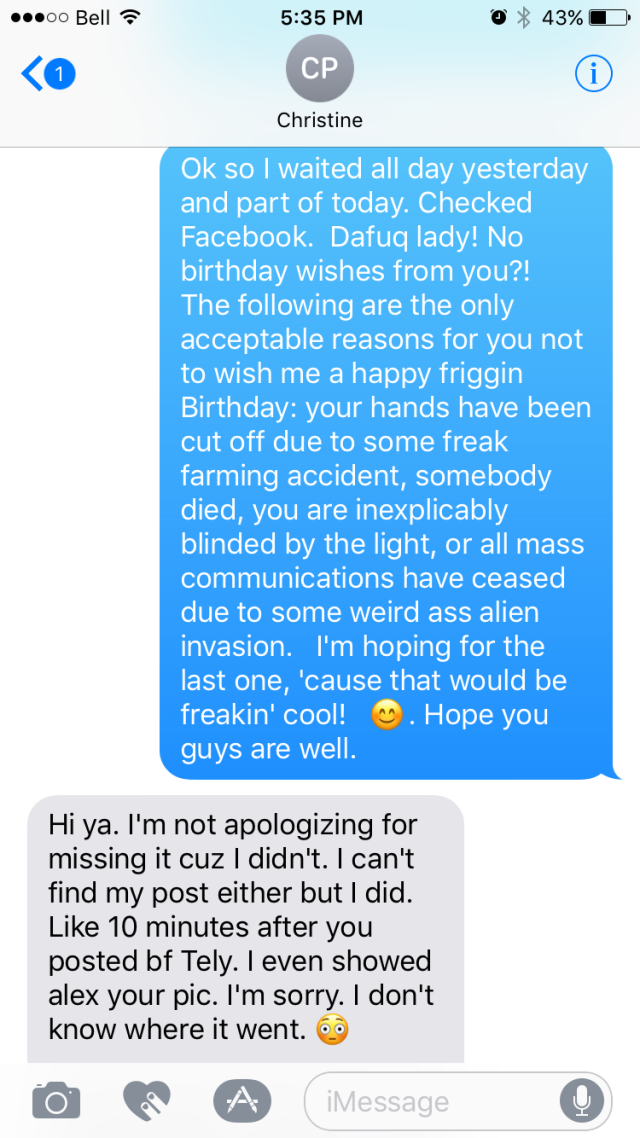 Actual conversation.  She still likes me…I think.
7. Watched the beginning of a movie and the end without watching the middle which is usually a vital part of the whole thing. In this case, it really wasn’t. Now, I think if I watch the first forty five minutes and the last half hour of any movie, I should be good. No need for all the junk that happens mid-way. It’s just the whole plot, I mean really, who needs that?

Part of the movie I missed, but I don’t think it’s that important, right?

6. Told a first-time runner and neighbour there was going to be band playing during the race, which two years ago there was I swear, but this time there wasn’t and now he’s all “THERE WAS NO BAND! WHERE WAS THE BAND?! I WAS LOOKING FOR THE BAND!” for the entire duration of the race. In my defence, YOU WERE LISTENING TO SOME ON YOUR IPOD SO THERE WAS YOUR BAND. MOVE ON. Gawd, I can’t be right about everything….kinda. By the way, if my garden gnome goes missing in the next 48 hours I’M LOOKING AT YOU!!

5. Since Hubby has returned to work, I actually did two loads of laundry. Dried. Folded. Put away. I don’t want to brag, but I think I did a better job at it. *Hubby, if you are reading this, feel free to try to best me on this one. Seriously. I know you THINK you’re good at laundry, but uh, my folding technique rocks! Okay, if you really want to try to beat me at this one task, I’ll let you try….I’M A GIVER.

4. I submitted two job applications for freelance work that were epic examples of my wit and humour and pithy prose to which the reply was *crickets* Nothing. OKAY, IF YOU REALLY THINK MY PITCH FOR A HANGOVER SUPPLEMENT WASN’T AN EXCELLENT EXAMPLE OF INTELLIGENT STORY-TELLING, ESPECIALLY THE PART ABOUT GRANDPA’S DART TOURNAMENT FIASCO, THEN GO AHEAD AND HIRE SOMEBODY ELSE. Gawd.

3. I’ve decided that being a responsible adult is overrated and better suited for everyone else, but me. In future refer all important tasks to an adult who will take requests, demands and questions seriously instead of answering with “I know you are, but what am I?”

2. According to viable sources, licking the top of a beer bottle will not dissuade other people from drinking from it. It just induces future licking of bottles and glasses until everyone is drinking from everyone else’s drinks, which really is kinda gross when you think about it. Next time, I’m switching the beer for…EWWW, NO I WASN’T GOING TO SAY PEE. UGH. THAT’S DISGUSTING. WHAT KIND OF PERSON DO YOU THINK I AM? BESIDES, DO YOU KNOW HOW HARD IT IS TO PEE IN A BEER BOTTLE?! You need a good *urinary device if you’re a woman, to pull that shit off…don’t ask me how I know that. (*medical terminology for a funnel or aid to guide the stream in the right direction. WHAT?! DO YOU KNOW HOW NARROW THE NECK OF A BEER BOTTLE IS??!! It takes precision and timing and…never mind. )

1. People in the ‘hood with pools: If you see a random rubber ducky in there, his name is Sid. No, I don’t know how he could have gotten in there, but don’t scare him. He likes to float around. Just sayin’…..

2 thoughts on “Top Ten List of: Shit I Did When You Weren’t Looking”