With the changing seasons, I like to review and take stock in what I’ve accomplished or completely fucked up during the past few months, just so I can kick myself or congratulate myself…depending upon, of course, the previous months’ activities. So far, in my list that I have drawn up in my head, I have both accomplished a few things and totally created an abyss of crap, so really…I can pat myself on the back while simultaneously kicking myself in the ass. Awesome.

Physically, I’ve done well. Hubby and I have completely overhauled our eating habits and done away with processed foods and added sugar. We still have our days where we eat crap, but they are few and far between. We’ve both lost between 20-25 pounds each and walk around the lake a few times a week now that the weather is cooperating. I’m still going to bootcamp 3 days a week and have added a bit of running a couple of days just to see if my 95 year-old hip can take it. So far, it’s not complaining too much. Most days I can even walk straight! Yay! I’ve noticed I can lift heavier weights, do better push-ups and not fall down into a complete mess when doing a box jump. All improvements. I still can’t do chin-ups, pull-ups, and walk on ice without falling or sliding under cars, but one can’t expect to do it all…right?

With age, comes tests and more tests to make sure you’re in tip top working condition. I sound like a mechanic looking under the hood of a car, but that’s how it feels. Bloodwork, xrays, ultrasounds, MRI’s, scan this, test that…ugh, it gets exhausting. Some of these ‘tests’ are invasive and overly tactile. I had an ‘internal ultrasound’ yesterday that I was NOT PREPARED FOR. The woman technician was trying to be really nice and understanding, but already admitted that she had not had one done herself , but WAS TOLD IT WASN’T THAT BAD. In response, I very sweetly said ‘oh, okay’ but my head was screaming WHAT THE ACTUAL FUCK LADY, I’M NOT HAVING THAT WAND STUCK UP MY HOO-HA SO YOU CAN TAKE PHOTOGRAPHIC EVIDENCE OF WHATEVER IT IS YOU NEED PHOTOGRAPHIC EVIDENCE FOR! GEEZ, AT LEAST BUY ME DINNER FIRST. HEY, IF I SEE THESE PICS ON FACEBOOK SOMEONE IS GOING TO PAY! That was in my head. The whole time. Not kidding. Then she was pointing out how she saw my ovaries “oh, there’s the right one. It was a bit hard to see. *giggle*” (me: * fuck off* I get a bit sweary WHERE THERE’S A GLOWING WAND INSIDE MY HOO-HA AND SOMEONE IS LAUGHING AT ME) Then, I hear her sweetly saying “okay, now just a bit of pressure” and you know when someone says ‘pressure’ they mean ‘I’m pushing as hard as I can to get a good look at that unmentionable stuff that no one talks about so don’t be such a big baby, will ya?’

Being a woman is terribly humiliating.

And getting older can suck.

Then I went back to work and totally felt violated and needed consoling, so I had a wrap and a diet coke…but I HAD TO PAY SO REALLY, IT WAS A SUCKY DATE.

THANKS TECHNICIAN, LADY. I hope when you have your internal ultrasound, you have someone there to pat your hand and say supportive things like, ‘THERE, THERE. YOU SURVIVED YOU STRONG LOVELY WOMAN” And NOT giggle at the discovery of your elusive right ovary WHICH WAS PROBABLY HIDING FROM THE WEIRD ASS GLOW STICK RANDOMLY WANDERING AROUND IN THERE. AND also you won’t have to listen to shit like, “OH I HEAR IT’S NOT THAT BAD AND HOLD ON, JUST A BIT OF PRESSURE.”

Here is a pic of a cute sloth. You. Are. Welcome. 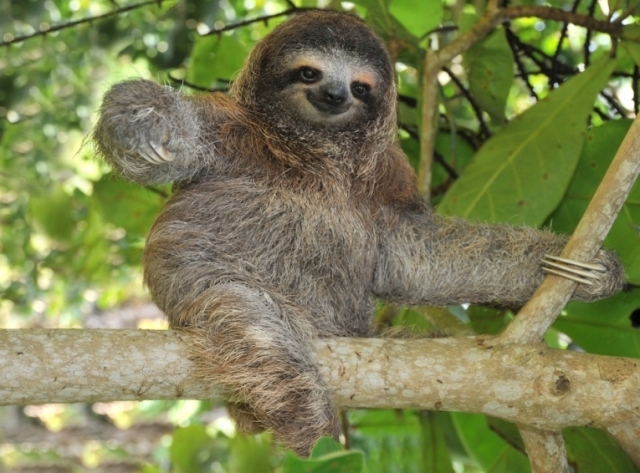