It’s almost mid-January and I’ve yet to write a full post.  I’m not sure if I should apologize or simply continue on reading sucky Donny tweets.  I have to say, if not for the race-spewing shit and the highly offensive ‘shit-hole country’ remarks, some are downright hilarious.  The one I thought I could actually plaster as a tagline on this here blog or bio somewhere, was absolute golden surfer-dude nonsense at its best.  Narcissistic inarticulate ignoramous gold.  “Actually, throughout my life, my two greatest assets have been mental stability and being, like, really smart.”  LIKE, TOTALLY GOLDEN, DUDE. I almost fell off my chair.  I texted the DH ladies to let them know my new bio line was epic in its, like totally wicked smart asshole-like way.  Like, Donald, are you like, really REALLY smart?  Or just the run of the mill, my-dad-only-gave-me-a-tiny-million-dollar-loan smart, whereby you compare yourself as enduring a life of absolute turmoil by having the word ‘no’ said to you, to the guy working two or three jobs day and night just to put food on the table and kids through school.   You understand that shit because, LIKE YOU TOTALLY HAVE BEEN THERE.  Dude. UGH. 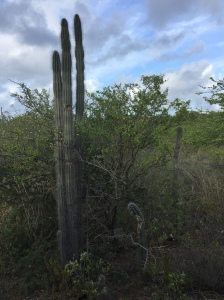 Here is a picture of a cactus I took whilst on vacation to distract you from the utter ridiculous-ness of the world right now. You. Are. Welcome.

It’s enough to make your head hurt and your faith in humanity south of the border wane just a bit.  After Oprah’s epic Golden Globe speech, the rants about having her be the next president made me a bit nauseated.  Seriously?!  YOU CAN’T HAVE OPRAH BE PRESIDENT JUST BECAUSE SHE CAN TALK GOOD!  And she rocked those specs. Making her look like, REALLY REALLY SMART.  GET OUT THE SANITY METER AND SEE WHERE SHE ENDS UP?!

Is that all it takes to be the President of a country?  Desperate, much? Tommy will be bouncing up and down on her yellow couch to proclaim the virtues of Scientology and the second coming of the Devil, AKA Leah Remini, and she’ll be wielding the presidential proclamation like a flag, all the while preaching ‘Your Best Self’ and having a Super Soul Sunday retreat with the VP and the Head of the FBI. I wonder if she would include the Fire and Fury book on Oprah’s Book Club essential reading list.  Huh.

And we’ll be up here reeling from the second hand smoke and scouring for munchies wondering what the actual fuck is wrong with the U.S.?  Dude.  Chill.

Grab the Acetaminophen and the wine.  Wait…pain relievers and alcohol don’t mix, right?  Weed and wine?

What happened to simpler times when Clinton was screwing his secretary and Chretien was getting pie-faced?

One thought on “Of Weed And Wine”