It’s true. There are some people in this world that are just hard to like. You know the ones. The obnoxious guy who always tries to make puns out of ridiculous things; the girl who incessantly judges all the other girls; the sarcastic narcissistic boss who decides you are not worthy of his time and/or discussion hence he ignores your pleas for a meeting and constantly schedules you to clean out the photocopy machine during lunch; the highly OCD/Religious lady who declares you Hell-bound lest you fall on your knees and immediately repent for the wine you drank last night and the garden gnomes you stole off her lawn during your drunken escapade… You know. THOSE people.
I’ve decided I should write down all the things I DON’T like about people, so I can discover all the things I DO like and compare. It’s a shit-list, but well worth my time…since the photocopier is a lame-duck anyway. WHO NEEDS LUNCH, EMMIRITE???!!! Ugh…
Since we all love a good list, here’s a list of characters I don’t like:
The “I-don’t-drink-cause-it’s-bad-for-you-and-not-because-I’m-a-recovering-alcoholic-which-would-be-way-more-understanding-if-I-was” person – WHAT IS UP WITH THAT?! I know, I used to be in your crowd, and as the saying goes, the rehabilitated are the worst…so that would be me. Instead of being the rehabilitated alcoholic, I’ve reinvented the program and did it backwards. I’m the rehabilitated non-drinker…tea-totaler gone alckie if there ever was one. I’m the worse…I love a good glass of wine…alcohol and I are good pals…in moderation. BUT REALLY? Nothing? Nadda? Cocktail? No? I just don’t see how we could go on being friends. Hand in your friendship rewards card. I just can’t deal right now… 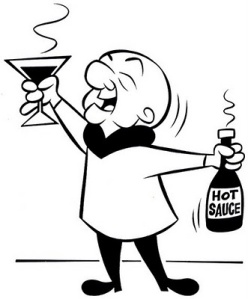 Bad drivers – Ugh. I think everybody admits to knowing a bad driver, but never admits to BEING a bad driver. With so many of BD’s out there, you would think SOMEBODY would cop to being the one and only asshole who takes pleasure in cutting you off, or speeds up as you are about to pass, or texts and drives then is surprised by rear-ending someone…I’m actually a pretty decent driver…seriously, I’m an excellent driver…just don’t talk to Hubby… no, don’t do that.

The Narcissistic “I’m- fucking-awesome-and-you’re-the-lamest-lamo-evah” dude – GET OVER YOURSELF. YOU SMELL. WE ALL FIND YOU HIGHLY OFFENSIVE AND AWFUL TO BE AROUND. GET OVER YOUR MOMMY ISSUES AND GET SOME MANNERS…AND STOP BEING AN EMOTIONAL FUCKWIT. I think that covers it.
Competitive, much? – Seriously. I can only handle the ‘you vs me’ thing so long before it gets old. I’m done. If we just come to a mutual understanding of cohesiveness and team work, all will be good. There is no need for this competitive bullshit that takes up way too much time and effort. It’s too hard…let’s move on. By the way…I WIN.
The Russian Judge just gave you a -10. – Judgey people are the worst, right? They decide who is right and who is wrong, who is ‘in’ and who is not, who wore it best, who wore it like a burlap sack, who has too much eyeliner on today, who is an idiot, who doesn’t belong because she has the wrong colour of hair, the mommy who looks down her nose at you after you had that glass of wine at breakfast lunch…seriously. If you can do better, than do it. Otherwise, be supportive…be objective…be open minded. Oh, Goddammit, just be Oprah.

The “You’re-going-to-Hell-and-I’m-not” person– okay. Jesus turned water into wine, right? He saved Mary Magdalene from being stoned to death, right? He told people not to judge others unless they want to be judged, right? Hmmm….

My Jesus toast says ‘Be non-judgey’

The Whiner/Constant Complainer – OH MY GAWD STOP IT ALREADY. It’s not going to get better by incessant whining…DO SOMETHING. If it’s not the way you want it, CHANGE IT YOURSELF. Otherwise, leave me the hell alone. I’m busy making lists…Ugh..

That should be a pretty exhaustive run-down of all that is annoying in this world. The awesomeness is below…
Givers
Considerate drivers
Tolerant
Positive
Good Sense of humour. Imperative.
Social people who make unsocial people less awkward and more social-ish. It’s a talent. They can draw people in and make them feel at ease, instead of reminding them of their usual awkward and self-conscious selves. It’s a rare gift.
Happy

So, the truth in assigning what’s wrong with people vs what’s right with people is as individual as the person. Unfortunately, it’s human nature to judge, its human nature to complain and its human nature to drive badly…so I’m told. I guess the human condition requires us to be more supportive and less rigid in our expectations, to be more tolerant and to be accepting of everyone as they are…as annoying and as difficult as that may be. We are all in this together…so putting up with each other’s idiosyncrasies is imperative if we are to have some check marks on the ‘awesome’ side of the list. Tolerant, giving, positive…words to define humanity at its best. We all have people we don’t like and think we could go on without, but if we did that, we would lose three quarters of the population! Who wants a world of ‘perfect’ people?

Wait…I’m thinking….
Sorry. ‘Perfect’ is an unreal ideal.
We are all human, afterall….