I finally found the family portrait I’ve been tearing the house apart trying to find.  I knew I had it, I just couldn’t figure out where I put it.  It’s one of those things I always meant to have framed, but due to the condition of the photograph, I was reluctant to do it.  It was once a coloured photo, but it has since faded with age.  It was taken in and around 1969, putting me at around aged 3.  My parents and my brothers and I are all standing on the porch of our house in Wallaceburg, Ontario posing rather nonchalantly at the guy with a camera pointed at us.   I actually remember the day.  My Dad’s friend agreed to take the photo since he had a good camera and some film.  We all rushed outside.  It was windy and even then, I hated the wind.  Luckily, somebody remembered to put shoes and a jacket on me.  Too bad, no one was worried about my obvious lacking of pants. 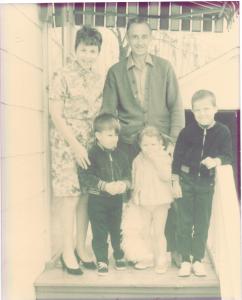 I’d like to think it was my choice to go pants-less, in a sort of  ‘hell-no, I do want I want’ sort of three year old rebellion.  Not, ‘oh, she’s cute in her pigtails and underwear.  It’ll be fine.’    Thanks.

My mom had on a nice dress and heels.  Her hair was combed and done nicely.   She even wore lipstick.  The boys wore jackets indicating it must have been a chilly day, and I DID have on a jacket.  Who needs leg coverings, am I right?!   My older brother had the misfortune of growing out of those pants at an alarming rate, while Kirk holds a big dice in his hands that I think was a paper weight.  He loved to play with it.  As long as he wasn’t throwing it and using his little sister’s head as a target, I think my parents were happy he was occupied.  Dad had on his signature cardigan sweater and oh yeah, PANTS.

Apparently, being the youngest affords one the opportunity to not trouble about trivial matters such as clothes, or in this case, pants.  I was more concerned the wind would take my breath away,  which is why my hand is over my mouth in a “OH, MY GAWD CAN SOMEONE TELL THE WIND TO PLEASE STOP WITH ALL OF THE BLOWING AROUND!” kind of moment.  It’s not a look of shock at my lack of attire, like one would normally think.  Not “DAMMIT I FORGOT TO WEAR PANTS TO THIS PHOTO SHOOT” kind of thought.  I think my parents were hoping my pink jacket was a tad longer to make it look like a dress, but sorry guys.  It just looks like I’m standing in my underwear shocked and appalled that someone actually took our picture with the little girl with no pants.

At least my red Keds were okay.  And I had that feathery toy that looks like a boa.  Wait…I HAD A BOA AND NO ONE THOUGHT TO PUT IT AROUND ME?!  DAFUQ PEOPLE, WORK WITH ME, HERE.

If I couldn’t have pants, the very least you could have made me look glam and put that feathery pink thing around my neck.   Gawd….