Hi. How are you? I’m not sure where to begin. I shall inundate you with shit that has no bearing on your life whatsoever, just because it pleases me. How’s that for a beginning? Yeah. I now speak like I was just crowned queen and sit on a thrown made of gold and velvet…or velveeta… which would obviously be more awesome. Who doesn’t love a throne made of cheese?!
The temperature in my office remains a chilly -25 degrees whilst outside the warm summer air is billowing the trees…I so want to be outside. I wear a coat INSIDE and take it off when I get out into the sunshine, instead of the other way around…I think that’s odd…especially since we seldom have sunshine and warmth simultaneously. I’m reveling in the irony.
Recently, my family had a reunion in my hometown and now the old black and white photos of yester year are popping up all over FB. I love it, not only because I get to see my mom and her sibs in their natural habitat when they were young and carefree, but because it also gives everybody a connection. Most of the pictures I have never seen, especially ones involving my Aunt Edie. She was an entity only in my mind. My mother would often say when I was younger, how much I reminded her of my Aunt who had died long ago, but I never knew why. I don’t know the circumstances of her death and I don’t know why I reminded my mother of my Aunt. I may never know, but it’s nice to see an actual face to the name. Maybe it was the way I twisted my hair when I was bored, or the expression on my face when somebody teased me about my freckles or how I continually get lost in unfamiliar places…and even familiar ones. It’s nice to know that your family remembers everyone even if they are no longer in their presence…and can retell old stories as if they are reliving a period in time that somehow got a little lost and by telling the stories, they can find them again, if only for a moment or two. It would be nice to make a reunion in the near future so I can hear these stories in person.
In the meantime, keep up with the pics and I’ll see if I can guess who’s who…and whomever Hercules was, I bet he was the one who thought outside the box and did his own thing…you can tell by the mushroom haircut and the goofy glasses. A man before his time. The name alone is awesome…it signifies greatness…Thought I’d throw that in there in case my cousin has another pic or two of that guy and can give me some clue as to how he managed to photo-bomb our family pics. See? Man before his time…. 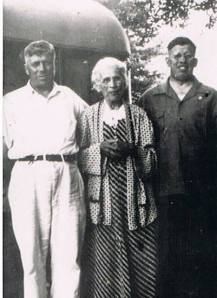 My Grandfather and Great Grandmother with William Hercules…who is awesome and on the right.

4 thoughts on “Bringing The Awesome From The Past”

That day your mom wore your sunglasses so you could twin #summerinthe80s #mompics #mollyringwaldhair #throwbackthursday
tonysbologna : Honest. Satirical. Observations.