I have a print that I bought when I lived in Toronto during my college days. It’s black and white with guys in a band playing their instruments on water.  When I bought it, my friend was with me and said “it’s you”.  So it became mine.  It adorned my walls from then (late 1980’s) until I got married.  It took up wall space in the first house, however, was relocated to spare rooms and basement dwellings since.  It has survived three kids, six moves, three provinces and random garbage purges where Hubby has threatened to throw it out never to be seen by anyone we know again.  I would always retrieve it and place it back in the confines of a secret hideout where I would hope Hubby would not notice it or try to remove it for a garage sale down the street.

Hubby has, on numerous occasions, proclaimed it ‘inappropriate’ for visitors to see.  I thought it was awesome then, and I still think its awesome now.  I always take his lamenting over my 80’s print as verbal manifestations of a childhood lacking in fine art instruction and I immediately pooh-pooh his suggestions for trashing it.

It is currently sitting idly beside our refrigerator in the basement behind a door; hidden from view and any visitors coming in and giving him that perplexed “WTF?” look.  At least, that’s the look he thinks people will give him.  I, on the other hand, would expect expressions of  “Gee, that’s the best black and white print of guys playing instruments on water while jumping excitedly, that I have ever seen!” and “Where did you get such one of a kind art?” and the BEST comment EVER:  “That’s fucking awesome”.  Yeah, that’s what I expect.  I think the general public should be given the opportunity to comment on the complete awesomeness of my taste in musical art.  I have taken a picture of my print for your perusal.  Comment below. 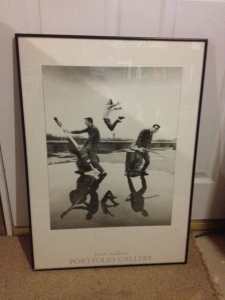 As for the visitors being hurt by viewing such a wonderful piece, I think it’s worth the risk.  My print should come out of the shadows and take a place prominently above my desk, you know for inspiration…and to piss off Hubby.  Yeah.  Great plan.  Make it so, number one!

When the print has taken its rightful place above my creative writing space, I shall take a picture and post it.  I can’t wait!!  It’ll be awesome.

Of course, there will be a fight about how I didn’t measure before I put holes in the wall and how it’s crooked/too high/too low/ugly as fuck…

Wow, the weekend is really shaping up! 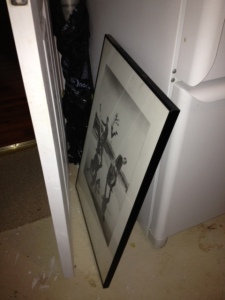 My print sandwiched between the basement door and our old fridge. Nobody puts baby in the corner.

6 thoughts on “The Print Behind The Basement Door”

A special DH evening celebrating this Mama. Thanks so much to @picnicdreamsnl and @nanskitchennl for making it extra special #babyshowerDH @megivany