I always find traveling stressful, but my levels of anxiety hit the proverbial roof when D1 decided to join Hubby and son and I on the New York leg of our vacation.  Originally, we were headed to the Canada Games to watch D2 and her rowing teams in Sherbrooke, Quebec, then going on from there to the Big Apple, sans the daughters, for some big city adventure.  D2 was heading back home after her Games competition with her team and D1 was staying put.  (We, Hubby and I, had advised D1 that if she wished to accompany us on any of our travels, we expected her to contribute, ie. pay her flights.  She said ‘no way’ we said, ‘ok’.  The night before we leave, she cries, laments then finally plops down and arranges her flights to and from New York.)  The worry ensues after Canada Games as she was only going to New York with us and she was left to manage Toronto Airport independently. Her connecting flight to La Guardia was three hours after landing in T.O. but she had to make it through customs, retrieve her bag and put it back in the correct baggage conveyor, then get to her gate…We had separate flights from Montreal straight to La Guardia.  Texting packages are a MUST HAVE.  She did fine…after only one mental breakdown and some ‘interesting’ texts….

THAT is what mothers are for.  We get the breakdowns, the laments, the cries of ” I DON’T KNOW WHERE I AM AND NOBODY WILL HELP ME!  WHAT DO I DO? WHY ARE YOU NOT ANSWERING ME??!!”  I calmly explained it was because, I WAS ON A FUCKING PLANE and therefore, was unable to answer your BATSHIT-LIKE CRAZY TEXTS. OR, “I’m so sorry you are having a bad experience.  Find a nice person to ask and bug them until they give you an answer you understand”.  Yeah.  I’m nice sometimes…

Just to let you all know, Sherbrooke was wonderful and very hospitable.  Despite my lack of Francais, I managed with a bi-lingual son (who incessantly reminded me that my annunciation of any and all French words was atrocious and should not be heard anywhere on the planet.  Nice. )  and some very interesting hand gestures.  There were some young people who were unable to speak ANY English and quickly found someone who understood my dying need for a tea (for Hubby) and a coffee at Tim’s.  I have some pics of Lake Magog where D2 had her rowing competitions.  It was all very exciting and she coxed the women’s 8 and the mens’ 8 to the finals, coming in 6th overall on both counts.  A lot of fun and she was very happy with her teams performances, considering the other provinces had athletes on their way to national teams and were given more access to expert training experiences.  Some even training in Florida during the winter months.  I think all things considered, Team NL had a good showing. 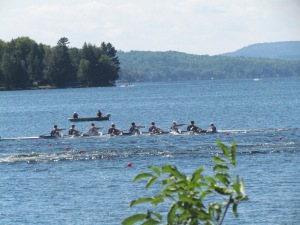 D2 and her men’s team

New York city was a whole other animal.  We flew into La Guardia and expected a hopping bustling metropolis airport, but instead found a small easy-to-follow-that-even-I-couldn’t-get-lost-in building that sent me into drivels of excitement and awe.  THANK God, D1 had only to walk down a flight of stairs to meet us where we waited for three hours after our flight landed and heard great questions from the Airport folk, like “You are all from Newfoundland? Wow, it must take you guys like an hour to get to Greenland!  You must go there A LOT”  Ummmm….Who the fuck goes to Greenland on purpose??!!

Yeah, he looked so disappointed at our answers of “No, we don’t go to Greenland, like EVER.”  Sorry, dude.

I would so like to go into a minute-by-minute play-by-play of how our escapade into the City that Never Sleeps went, but I wouldn’t want to bore you all into a City That Always Sleeps, so here are some tips and highlights that we found useful while visiting the home of El Gupowitz. Whom I didn’t see. Unfortunately.

1. Take every possible bus tour available.  It helped us get a ‘lay of the land’ so to speak and SOME of the tour guide peeps were awesome…some were inaudible and seemed rather bored with us.  I got a lot from the guy who knew every possible detail about the architecture of every possible building in New York and Brooklyn.  I found him interesting…Hubby found him annoying.  Whatevs…,.

2.   We stayed right smack dab in the middle of Times Square.  The hotel was quiet since we were facing towards the river…kinda.  It was there somewhere behind the apartment buildings, I’m sure it was.  Either way, we were able to walk out of the hotel and be right in the middle of stuff that no one in a lifetime should witness. EVER.

3. A map is my bestest friend.  New York is on a grid so the streets were easy to get lost on, I mean, reassess my original position and get to the destination without too much ‘recalculating’ going on.  The only real time I got confused is coming back from Central Park, we were walking, Hubby and son left daughter and I in Century 21 (mistake 1) and ASSUMED I could find Broadway.( mistake 2)  Oh, I found Broadway, until Columbus reared its head and I crossed three streets unnecessarily to find myself back on Broadway.  It was all confusing…and raining…and we were tired.  What?  We made it back to the hotel before Hubby and son…cause they stopped at McDonald’s (eww) for shakes.  Ugh…a big city and they go to McDonald’s….apparently, American McDonald’s make milkshakes better/different than the Canadian McDonald’s…apparently.  I have no scientific proof of this.  Only son’s word. Which is about as scientific as it gets, around here.

D1 in Central Park…”Ummm…weren’t we supposed to go that way?” Ugh.

4. Asking for a ‘pop’ will get you a weird look.  We had lunch at a diner in Times Square and I made the mistake of asking for a pop…soda in the USA.  My bad.  I didn’t think it was that much of a difference, but I was wrong.  She gave me the ‘what the hell are you talking about?’ look, to which I quickly realized my mistake.  After that, it was back to asking for a Diet Coke. 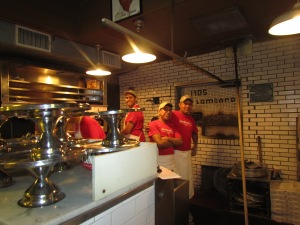 The guys in the kitchen at Lombardi’s Pizza. They made our pizza and gave me wine….I like those guys.

5.  How do you pay for the Subway?  The tokens look exactly like our loonies and it was downright confusing for us to differentiate between the two.  We finally figured out the subway machine and once we pissed off the subway token-lady with all of our questions and had a hell of a time manoeuvring the turnstile so we could all get through without broken pelvic bones, we were on our way.  It cut down our travel time in huge amounts.

6. It’s not the New Yorkers who are rude, it’s the other tourists.  Yes, we were pushed aside, snubbed, and cut in front of, not by the locals but by other tourist-peeps.  Take it easy, will ‘ya?  Geesh.  We found the local New York crowd pleasant, happy to help and downright congenial.  Thanks, eh.

7. There’s lots of walking so wear comfortable shoes.  Hubby was disappointed that I wasn’t wearing heels the whole time…huh?  Walk in those puppies, will ‘ya?!  I wore my unfashionable Skechers most of the time and my feet were thankful.  We walked EVERYWHERE.  Much better way to see the city…and great exercise.

8. We saw a celebrity and didn’t know who she was.  Oops…Lady GaGa was premiering her new music video unbeknownst to us regular Un-GaGa-like fans.  Did you know that much to a Canadian’s delight, there are TWO Tim Horton’s in Times Square??!!  SQUEEEEE!  Son and I were on our way to one of these little Canadian Havens, when lo and behold a big black car makes its way down Times Square and loads of peeps were milling around and son and I were like “WTF?” (only I said that, son just nodded in agreement) and then we were like “Who Dat?” and then I snapped this: 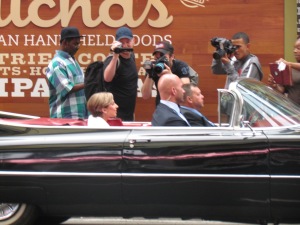 GaGa in a car with some scary dudes. I know. I can feel your excitement. Calm the fuck down. Geesh.

AND THEN, somebody said “Lady GaGa” and we were like “Ohhhhh…k” .

9. Always have Advil, bandaids and extra umbrellas on hand when it decides to rain, or D1 decides a random brain tumor has returned and she needs to take an Advil or 5 and then it rains and we need chocolate from the M&M store to make us feel better and of course the Ferris wheel at Toys R Us because we are “still kids you know” and need to have fun.  Yeah.

So, I wish I could come up with one more point, but I fear this is way too long already and I’ve noticed that Hubby has poured himself a glass of wine without me, so lest I be left out completely, I should saunter over to the comfy couch and get some wine before he drinks it all.

Thanks for reading and for all your good behaviour, I give you the naked cowboy.  Only he wasn’t really naked like the pink lady, he had on underwear…she was just wearing body paint.  Totally normal for Times Square I hear. 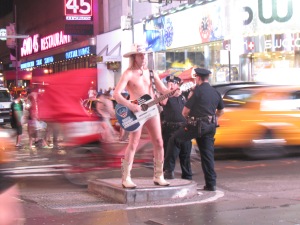 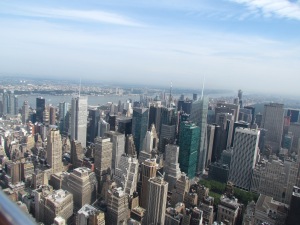 A view from Top of the Rock